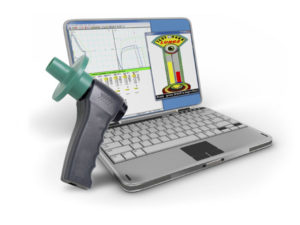 Spirometry, or lung function testing, measures airflow rates and lung volumes of air going in and out of the lungs. A spirometer is a device that contains a special sensor behind the mouthpiece and is typically connected to a computer providing measurements of airflow. Spirometry is critical in the diagnosis and following of asthmatics or any patient with lower respiratory complaints.

Based on the shape of the inspiratory and expiratory curves produced during the testing, spirometry testing reveals critical aspects of airflow to the patient’s lungs. The testing provider can explain certain causes for lower respiratory complaints and design a treatment program accordingly.